Why Don't Businesses Value Their IP?

The ever-popular and ever-despairing topic of client education in the world of IP is an interesting one. Despite the years of debate and initiatives employed by various individuals and bodies alike, little active progress can be reported. The useful question to ask then becomes whether or not there is likely to be any progress in the future.

While the challenges related to correctly creating, valuing and protecting IP are in some ways unique, the practice of law in general can find resistance amongst the general populace in surprising ways. While there is little difficulty valuing the contents of a will, for example, getting people to understand and act on the importance of making a will in the first place can be an issue.

We spoke with Joe Quigley of Rivet LLC to get his take on this perennial and thorny problem:

Do you think the problems caused by a failure to recognise and protect the value of IP are significant?

"Yes, they are significant problems and I have seen it come up several ways during my career, despite the fact that companies always claim that it is important. Often, that concern comes later in any business process and often times companies don’t want to spend the money to get the long-term protection in place. This can be exacerbated when such costs are allocated to various business units based on their business lines or their territories. For instance, when a brand wants to launch a new product line, whoever has to pay for it often has great influence on the sort of coverage such a trademark receives. If, for instance, an international division doesn’t see much promise for the product, they may not want to pay for international filings. I always advocate for part of the IP budget to be a corporate allocation so that such decisions, which can have long-lasting effects for a business, aren’t made by someone based on a small budget that they are trying to protect."

"Additionally, although many companies claim that IP is very important, they do not have the IP team involved early enough. It is essential that the IP advice is given early in any new product design or naming or any campaign so that the business doesn’t fall in love with something only to find out later that what they want to do isn’t clear or includes unforeseen risk. Getting involved early can help avoid this issue which causes problems for the legal team and the business. The IP professional has to be very proactive in educating the client about the need to have them involved early and must demonstrate how that is good for the business. The earlier the IP professional is involved, the more issues that can be avoided later in the process."

Many companies have mentioned slow and inefficient services as being problematic. Do you think this has had an impact on their view of trademark services, and therefore IP, in general?

"Absolutely. I have been practicing trademark law for a long time – before Google, smartphones and wi-fi. Yet, many IP professionals still conduct clearance as though it was 1990. I think it hurts your credibility to tell your business partners, who are used to instant information that it takes 2 weeks to conduct a full trademark search or 3 days to do a knockout search. I think that the days when such timelines are acceptable are not long for this world, if they are still even acceptable."

What advice would you give an in-house attorney who struggles with a negative or ‘laissez-faire’ approach to the IP of the business?

"It’s a tough spot to be in, but as someone who has been doing this a long time, I can guarantee you that money spent earlier on IP is always going to be less than the money to spent later. However, there is realistically only so much that can be done. You must educate your client about what is the most practical and cost-effective way to take a long-term approach to IP protection. This can be especially hard in larger, public companies where there is pressure to perform quarterly and the business may not want to spend the money now for a benefit that it won’t get until later. However, solving IP issues arising from not getting the proper protection from the beginning can be (1) very expensive and (2) sometimes impossible to solve. If you are dealing with issues in first to file countries where someone else has filed, it can be very difficult to get ownership of your marks. Ideally, if your company is an international enterprise, you have a good idea of where they are currently and where they plan on being in the next 3-5 years and you are planning accordingly."

The demand for in-house counsel to demonstrate their value and work as a partner to the business they serve has never been greater. TrademarkNow has partnered with Joe Quigley, founder of Rivet LLC for a masterclass in building and developing the unique and diverse skill set required of in-house IP counsel.

Don’t miss your opportunity to benefit from the experience and insights that built his FAST, PRACTICAL and COLLABORATIVE approach to trademark clearance. 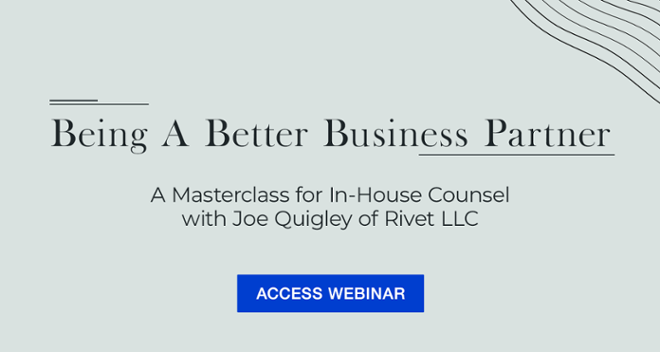