As we leave the last month of this turbulent decade, it is fascinating to look back at the most significant developments. Imagine going back in time to 2010 and telling someone that over the next ten years, their phone would run almost every aspect of their life (and consume most of their attention), we would all be obsessed with selfies and the digital camera would go the way of the dodo, Britain would lose its head and vote to leave the world’s largest trading bloc, and Apprentice star Donald Trump would be President of the United States.

You would have either been laughed at or asked politely if you needed a lie-down.

Over the past 12 months, trademark law has experienced some dramatic developments.

Canada accords to the Madrid Protocol

Canada overhauled a large chunk of its trademark laws in 2019, most of which came into effect on 17 June. The country joined three WIPO treaties, namely the Madrid Protocol, the Nice Agreement, and the Singapore Treaty. This followed Canada and the European Union (EU) signing a historic trade deal in 2017.

By acceding to the international trademark system and the other key trademark treaties, Canadian businesses have access to a more efficient means of protecting their trademarks across the globe. The move also lowers the cost of doing business in Canada. International investment is also likely to increase as acceding to the Nice classification system mitigates foreign trademark applicants’ risk.

The most significant development in U.S. trademark law this year was the requirement that all foreign domiciled applicants must appoint a U.S.- licensed attorney if they want to file an application with the USPTO.

According to the USPTO, this policy requirement, which came into force in August, became necessary due to the increasing number of incorrectly filed and even fraudulent applications the office was receiving.

Note – although Canadian attorneys will be recognized as representing their clients, the USPTO will only correspond with a U.S.- licensed lawyer.

China has suffered a tsunami of bad faith trademarks and trademark squatters over the past decade. In an effort to return order to its register, the Trademark Law (the fourth amendment) came into force in April 2019.

A significant development is a new provision added to Article 4 of the Trademark Law – “Malicious trademark registration without an intention to use should be rejected”. This allows Chinese trademark examiners to reject obviously bad faith trademarks at the application stage.

Furthermore, the TMO may invalidate a maliciously registered trademark. And the maximum amount of punitive damages in the case of “malicious and serious” trademark infringements has been significantly increased.

Time will tell how effective these changes will be; for example, “without an intention to use” is not defined in the law. However, the Chinese government’s move to pull into line what has so far been the wild west of the trademark world demonstrates its commitment to increasing its position as a stable place for innovation and investment.

Malaysia is another country which acceded to the Madrid Protocol in 2019. It passed the Trademarks Bill 2019, replacing the 43-year-old previous Act.

Applicants in Malaysian territory will, for the first time, be able to choose multiple classes when filing a trademark application.

The Bill provides (as long as certain conditions are met) recognition to non-traditional trademarks such as the shape of goods or their packaging, sound, scent, color, holograms, positioning, and sequence of motion.

The EU Trademark Directive 2015/2436 had to be implemented by all member states by January 2019. Countries now have until January 2023 to implement administrative cancellation proceedings.

In practice, implementation of the Directive means applicants will not need to produce a graphic (visual) representation of their mark. Instead, electronic formats, such as MP3 or MP4 can be used. This makes it easier to show more precisely any marks which incorporate, for example, movement or sounds.

The prohibition against registration that has traditionally applied to shapes that perform a purely technical function, add value to goods, or results from the nature of goods, now extends to any characteristic applicable to the particular good. Another change is that once the mark has been accepted by the trademark registering body it will be published before it is registered to give others a chance to object. However, if the objector's mark has been registered for five or more years without being used, any opposition may fail.

These are just a small taster of changes which occurred over 2019. Further information can be found in our 2019 Retrospective fact sheet, “Nine Momentous Trademark Regulation Changes”. The 2020s will undoubtedly bring even greater changes thanks to the rapid advancement in digital technology. From the Internet of Things (IoT) to Artificial Intelligence, trademark applications are predicted to get more convoluted and even more internationally focused.

In this fact sheet we take a look back at 2019 and examine significant trademark regulation changes in nine territories. In this resource our Trademark Counsel has highlighted each change and noted its relative importance for trademark professionals.

As Confucius (551–479 BC) wisely said: “Study the past, if you would divine the future”. Find out what 2020 holds for the international trademark community! 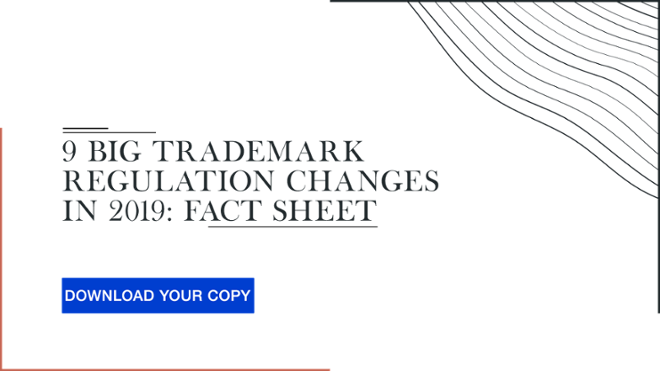