There are times in life when we will all feel lonely or isolated. Stressful events, such as the current COVID-19 pandemic and the new travel restrictions that are in place for many of us may mean that we are also now feeling emotionally cut off from family and friends and feeling alone.

Worries can also be a cause of loneliness. It's normal to feel lonely at certain times of life. Anyone having a hard time with bullying or intimidation, or dealing with bereavement, or perhaps finding it a little hard to talk to others because of social anxiety or shyness, or living away from home for the first time, or seeing friends or family move away - could be at risk of loneliness.

And, disconnection between friends and family, social isolation, and loneliness is something that the elderly can face even during ‘normal’ times.

Isolation of elderly people is a risk to well-being

According to the book “The Second Fifty Years: Promoting Health and Preventing Disability”, by Robert L. Berg, social isolation can be defined structurally as the absence of social interactions, contacts, and relationships with family and friends, with neighbors on an individual level, and with “society at large” on a broader level. Accordingly, the social isolation of the elderly is often referred to as a risk factor for the general well-being of our older population.

With self-reported loneliness on the rise globally, brands have been actively looking to combat this epidemic by various means - from studying social eating habits to creating on-demand communication, co-living, and co-working concepts. Here are three brands that have put the issue of loneliness front and center.

Romania is no exception to the risk of loneliness. According to the online magazine Business Review In Romania, for every 100 young people (aged 0-14 years) there are now 113.4 older people aged 65 or more, compared with 100/110 just one year earlier. According to official government statistics, 40% of the population over 65 years of age is living alone.

British multinational telecommunications company Vodafone Plc owns a unique brand name and trademark, BUNICI DE DUMINICA, that is helping to combat the loneliness of the elderly in Romania. Initially, the trademark was registered with the intention of being a kind of social experiment. Vodafone taught two “grannies” in Romania how to use social media to connect with family and friends - using their network and smartphones.

The story behind the trademark

Two elderly women moved in together when their husbands passed away in order to keep each other company and to prevent their isolation from society. They created a Facebook account with the brand name in October 2014, which now has 357,949 followers at the time of writing. The two ladies continued to do the one thing that they loved most (and the one thing they missed most) - cooking and sharing stories over Sunday lunch - and shared them online through social media.

They invited the students to join them, who missed home-cooked meals and shared those moments with them. Very quickly their Sunday lunches became very popular on a national level and today they even sell their own products!

This amazing social campaign and BUNICI DE DUMINICA trademark is still valid today. Registered with the Romanian OSIM as of 19th January 2016 in multiple Nice Classes by Vodafone Group PLC, the mark covers various kinds of goods, including textiles and textile goods, artificial flowers, and carpets.

Komp is a brand that is owned by Norwegian startup “No Isolation”. The company was founded in 2015 with the aim of providing technology products for people who are feeling lonely or isolated.

Komp is aimed at the elderly who are confined to their homes or nursing homes and who seldom see their family and friends. It is a monitor with just one big on/off switch. Settings are managed from a companion app, which one of the family members controls. The app can be used to make video calls or to send photos to the Komp, which shows the images in a picture carousel.

The use of the product has increased during the pandemic. According to Ezine ZDNet, “In a week in February, each Komp received an average of 11.5 photos and 1.9 video calls. In April, each unit received 17.4 photos and 8.5 video calls on average”.

Registered in Nice Class 9, 35, 38, and 42 in Norway’s PS on 28th March 2018, and as an international trademark through WIPO designated EUIPO and Switzerland on 8th July 2019, the mark text KOMP is owned by No Isolation, AS.

Amintro is a new app that is available in Canada. It has been specifically designed to combat loneliness and social isolation experienced by older adults aged 50+ with the primary goal of fostering platonic friendship. Founder Charlene Nadalin told Canadian radio station Canoe FM that she was inspired to create the online platform after her own mother faced loneliness following the loss of her husband at the age of 56 and her social networks grew smaller.

Trademark coverage at your fingertips

The tool can be used in many ways as it helps users to pinpoint specific data sets of information and offers different ways to search and filter through international trademark databases.

You can also analyze your target trademark and see its territorial coverage, including the Nice Class and representative information.

ExaMatch is the instant answer to your trademark queries! 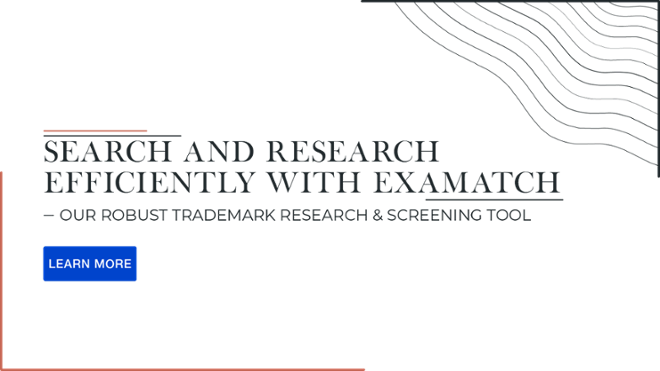 By Gokcen Uzer Cengelci / Lisa Wright September 17, 2020
Gokcen Uzer Cengelci, Trademark Counsel at TrademarkNow, worked as a trademark attorney for over 12 years in top-tier trademark law firms where she specialized in opposition procedures and trademark portfolio management strategies. She regularly publishes articles on trademark law and has a deep interest in the role of legal tech in IP. Lisa Wright, Content Writer at TrademarkNow is a graduate of the University of Law. She researches and publishes books, articles, and webinars on global IP law and trademark activity.