On the 14th of September 2020, it was announced that the European Union and the Government of the People's Republic of China signed a historic agreement to cooperate on the protection of geographical indications. In this article I highlight what IP professionals need to know about the Geographical Indications Agreement (“GIA” or the “Agreement”).

The GIA, concluded in November 2019 and authorized in July 2020, will create reciprocal protections for GIs from both regions, namely 100 European GIs in China and 100 Chinese GIs in the EU. Four years after its entry into force, the scope of the Agreement will expand to cover an additional 175 GI names from both sides.

The Agreement is expected to come into effect in 2021.

A geographical indication (GI) is an umbrella term for the signs used on products that have a specific geographical origin. These signs protect the quality and reputation of the products derived from a particular territory. These terms enable consumers to determine the quality of a product, based upon the area from which it comes (largely where the product type was originally produced, invented, or has become most famous for). Examples of GIs include: Darjeeling tea from Darjeeling, India and Champagne, which comes from the Champagne-Ardenne area of France.

There are three main ways to protect a GI:

2. By using collective or certification marks; and

3. By methods focusing on business practices.

Consumer reliance on the products’ quality for GIs is a crucial point of departure for sui-generis protections and this consumer reliance behavior is becoming more and more critical due to consumers’ increased quality demands (i.e., for organic or fair trade produce).

GI protection in the EU and China

China also protects GIs (like the EU) by way of specific laws or decrees. Owners also have the right to get protection in the form of collective marks and/or certification marks.

This is an important factor from the perspective of trademark law because these GIs are protected by trademark law by means of either collective (EU and China) or certification (China only) trademarks simultaneously in both territories. This alternative trademark protection enables GI owners to create active branding strategies for their GI products.

The GI sui generis system protects the quality and the reputation of the product itself and prohibits any misleading or evoked use, whereas trademark protection gives a separate opportunity to create signs for products that will distinguish a particular product from other players in the same or similar industries.

It follows that reciprocal recognition of GIs between countries will bring greater reputation amongst reciprocal consumers. This means that GI owners might very well create more signs to indicate their products and we might expect to see the implications of this agreement in trademark data too in the coming years.

The Economic Impact of the EU - China GI Agreement

As has been set out above, both the EU and China have their own regimes to protect certain products through geographical indications. The new Agreement between the two, however, has been defined as a landmark treaty; one that will bring significant trade benefits for both European and Chinese GI producers and regions. The EU list of GIs to be protected in China includes: iconic GI products such as; Cava, Champagne, Feta, Irish whiskey, Porto, Prosciutto di Parma, and Queso Manchego.

“European Geographical Indications products are renowned for their quality and diversity, it is important to protect them at an EU and global level to ensure their authenticity and preserve their reputation. This agreement will contribute to do this, while also strengthening our trading relationship, benefitting our agri-food sector and consumers on both sides.”

In China, Ye Bin, a research fellow specializing in EU laws at the Institute of European Studies at the Chinese Academy of Social Sciences in Beijing, affirmed: “The agreement demonstrates China’s wish to promote the construction of an open world economy.”

And, according to the CNIPA: "It also plays a positive role in promoting opening up in IP sector and safeguarding the legitimate rights and interests of both domestic and foreign companies."

Growth potential on both sides

This economic imperative is one of the main reasons behind the Agreement as the Chinese market holds enormous growth potential for the EU. According to eurostat, in 2019, China was the third largest destination for EU agri-food products — reaching €198 billion in trade revenue.

China is also the second largest destination for EU exports of products protected by Geographical Indications. The China market accounts for 9% by value of products including wines, agri-food products, and spirits.

European consumers can enjoy access to authentic Chinese specialty food, drink, and other products once the Agreement comes into force. In 2019, China was the largest partner for EU imports of goods (19%), with the Netherlands taking the top spot as a destination for Chinese imports amongst EU member States. The total value of EU imports from China in 2019 was an impressive €362 billion.

“This is an important opportunity for Chinese agricultural products to boost their brand influence in the world,” said Fu Tianlong, president of the Fujian Chunlun Group, a leading tea company in China.

Trademark applications in the food and beverage industry

In addition to the protection provided by GIs, trademarks owned by food and drink companies in both the EU and China seem to be holding their value in recent years and appear to be well-worth the investment.

“China is a high-growth potential market for European food and drinks. This Agreement will therefore benefit European producers and should be a boost to rural areas where these products are made,” the European Council recently announced.

When we compare trademark activity for 2018 and 2019 through our preliminary trademark screening and business intelligence tool, ExaMatch, we find that the volume of trademark applications at both the EUIPO and CNIPA (in Nice Classes where these kinds of trademarks are typically most often filed; namely: 30 (Staple Foods), 31 (Natural Agricultural Products), 32 (Light Beverages), and 33 (Wines and Spirits) increased in 2019 in all cases.

To give you further insights into overall trademark trends in the EUIPO today, Corsearch and TrademarkNow examine these in our new Trademark Report.

In this Report, we uncover which Nice Classes were impacted the most and the least in terms of volumes of trademark applications when comparing the first six months of 2020 to the same period in 2019.

We also reveal the top filers and which product descriptions topped the list during the same period! 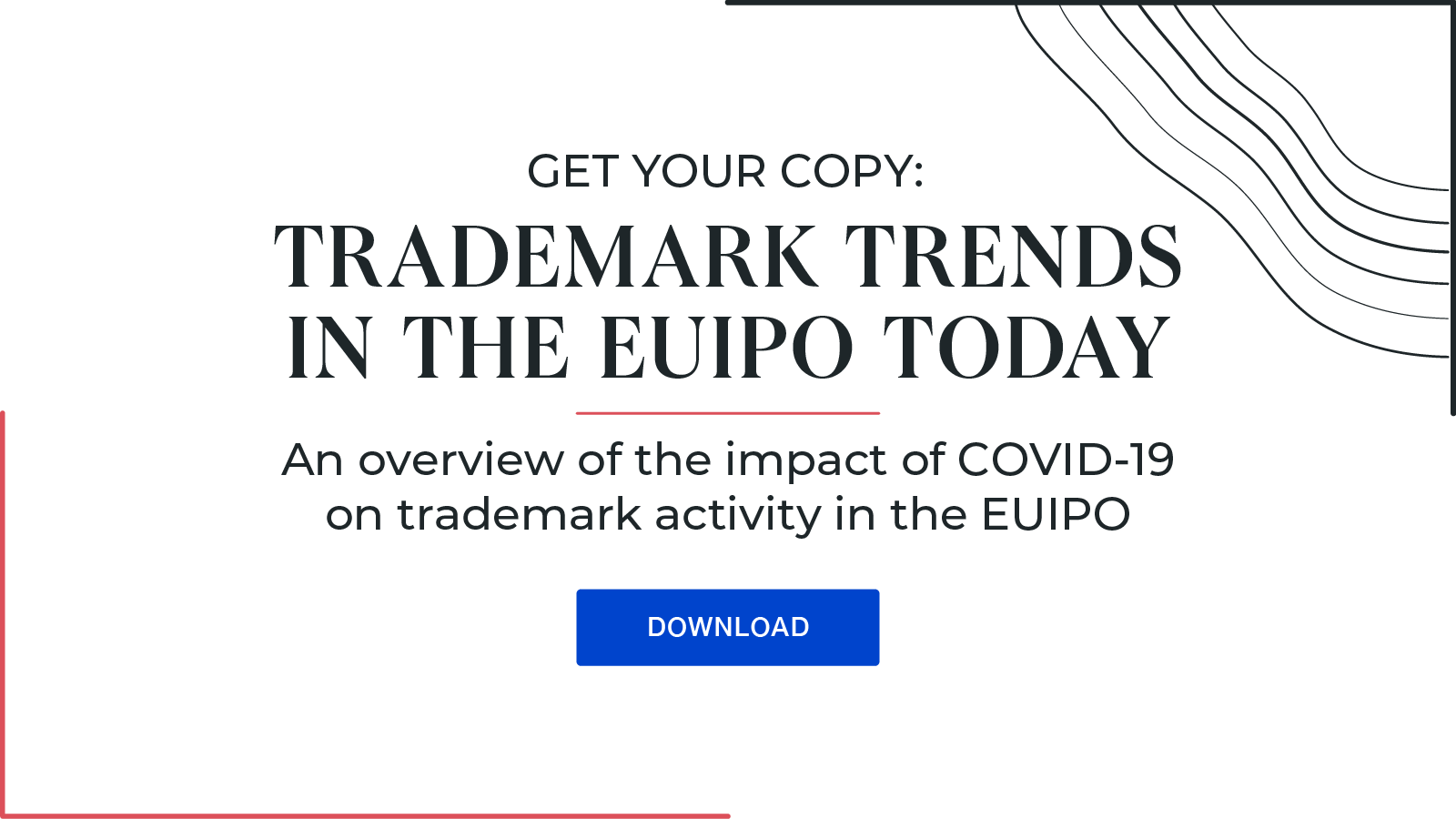