English writer, A. A. Gill described nostalgia as "the warm, crumbly, honey-coloured, collective 'yesterday' with its fond belief that everything was better back then…". Nostalgia tugs at our soul, tearing us away from the frantic present and uncertain tomorrow and gently guiding us back to the past, where everything was safe and predictable.

Nothing brings back the wonderful feeling of nostalgia more than the products we grew up with. Especially, of course, certain foods. All 90s kids remember Melody Pops and Teenage Mutant Ninja Turtle cereal.

Many of the products and brands that people born after 1980 were surrounded by have long disappeared, thanks to changing consumer demand, or, more commonly, the Internet. But what happened to the trademarks associated with some of the best-known brands of the past? Have they disappeared too? Or are they still around, waiting patiently for another chance to disrupt their relevant markets?

Let's take a look at some of the big brands of yesteryear, starting with music.

Oh, the Walkman. It changed listening habits forever. Suddenly, you could walk down the street, ride on the subway, exercise – at the same time as listening to the mixed tape your boyfriend/girlfriend made for you. Before the Walkman was launched in 1979, your only means of listening to music as you moved around was via a portable radio. Sony allowed us to customize our own playlists.

The Sony Walkman massively influenced youth culture in the 1980s and became inextricably linked with the fitness/aerobics craze that hit at the same time. Studies showed that during the Walkman's heyday (1987-1997), walking increased by 30%.

The name Walkman eventually became a victim of genericide in Germany and Austria, meaning the term had become a common noun. "Walkman®", "WALKMAN®", and their respective logos are trademarks or registered trademarks of Sony Corporation. Our preliminary trademark search tool Examatch shows us that there are over 100 expired 'Walkman’ trademarks; however, over 200 are still valid at the time of writing, owned by Sony, which means the name Walkman still continues to hold a value.

You may have a hard time convincing your children that once upon a time, i.e. around 2000, if you wanted to take a photograph, you loaded a film in a clunky-looking thing called a camera, snapped until the film was filled with pictures (this could take weeks), then walked down to your local camera shop or pharmacy and dropped the film off to be developed. Upon return, you would be handed a set of prints and the negatives of the pictures you took.

The earliest easy to use instant camera is thought to have been invented by Edwin Land, the co-founder of the company which would eventually become Polaroid, in 1948. All 57 units that went on sale before Christmas that year sold out in a single day. Now they and the trademarks that accompanied them have been consigned to history.

Polaroid filed for bankruptcy twice between 2001 and 2009 and president and CEO Scott Hardy told Fast Company in 2014 that “from 2005 to 2009, we went through six CEOs.”  By 2006, the company stopped producing the Land Camera. Instant film was no longer produced after 2008.

Polaroid Corporation currently has more than 2,300 expired or invalid trademarks, as opposed to just under 100 valid marks. Almost 50% of the trademarks filed by the company are/were in Class 9. And the most prolific filing year for the owner was 1994 - with more than 170 applications.

Forget the skinny jeans of today. Back in the late 70s early 80s, Sasson Inc. made jeans so tight you had to lie down on the bed to zip them up. Fortunately, people could breathe comfortably again after the brand filed for bankruptcy protection in 1986. The collapse of the brand was blamed on imports, which by the time of the bankruptcy filing, had taken over 20% of the market.

Competition for the name Sasson was fierce. In 1980, hair stylist Vidal Sassoon brought a $25-million lawsuit against Sasson Inc. for the “appropriation of its name.” A resolution was reached after Sasson agreed to minimize confusion by not pronouncing the last syllable of Sasson jeans so that it sounded like the word ‘soon’.

Today, the once-mighty Sasson Jeans Inc has just 5 valid marks, all of which are in Class 25. Top products include hats and culottes - as well as jeans of course!

This article brings home how fast things have changed, even in the last decade. Activities such as going to the DVD store, using the library to research, and even simply having to wait for what we desire have disappeared (or are fast disappearing). However, for trademark professionals, this progress provides an incredible opportunity for increased business.

The last decade in trademark numbers

In our new trademark report we take a closer look back at trademark activity over the last 10 years in the USPTO and the EUIPO.

We identify the top 5 Nice Classes of 2010-2019 by volume of applications and also examine and analyze each Nice Class by its respective activity, taking into account volume, top filers and products, as well as success and opposition rates.

Spoiler alert: there are no signs whatsoever of the fourth industrial revolution slowing down! 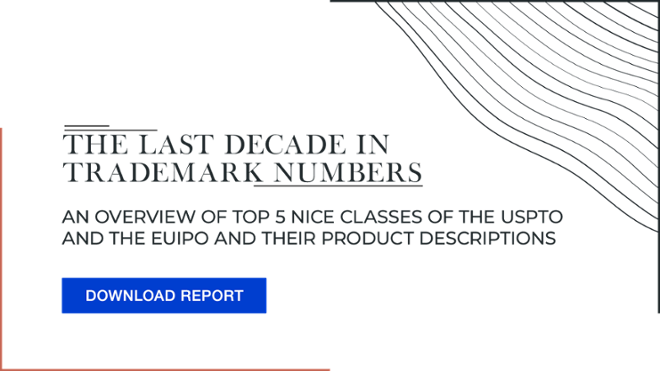