The drums of economic doom have been soundly beating throughout 2019. The consensus is a global recession in 2020 is now a serious prospect due to the US/China trade war, Brexit, currency gyrations, and slow growth across most nations.

A report by UNCTAD, the United Nations trade and development body states:

“A spluttering north, a general slowdown in the south and rising levels of debt everywhere are hanging over the global economy: these combined with increased market volatility, a fractured multilateral system and mounting uncertainty, are framing the immediate policy challenge.”

The pharmaceutical industry is facing its own challenges amidst this global slowdown. UK Labour Leader, Jeremy Corbyn announced at his party’s annual conference that if Labour gets into power, they will shake up the sector with its “Medicines for the Many” initiative.  Spotlight has also fallen on the industry’s carbon footprint. A study has shown the pharmaceutical sector is significantly more emission-intensive than the automotive industry.

Given this taxing time, scoping out the current trademark trends within the industry can help identify how the sector plans to take advantage of the changes mentioned above.  Holistically, Big Pharma is in a strong position to ward off profit tumbles in recessions. Patient demands for medicines are fairly stable, therefore not subject to price fluctuations or demand reductions. Furthermore, as the population ages, the demand for cancer, heart, and dementia medications will only increase. A 2013/14 WHO paper stated that during the 2008 economic crisis and in the immediate years following:

“…despite numerous policy changes and contrary to our expectations, overall consumption of pharmaceuticals in the 10 highest-selling therapeutic classes continued to increase in most countries; there was no clear difference between economically stable and less stable countries.The observation that the value of sales declined while the volume was maintained may indicate that pharmaceutical purchasing became more efficient.”

When looking at Pharma related Nice classes 1, 3 and 5, the following observations can be made over the period between 2008 -2018:

One sector that will be essential to humanity’s ability to cope with climate change is the pharmaceutical industry. In February 2018, WHO released a report on climate change and health and the findings were not easy reading. To quote:

Europe will be a significant growth market because tropical diseases which have previously not been prevalent in the Continent due to its cooler temperature will rapidly become an issue that needs solving through vaccines and treatment drugs. A report by Morgan Stanley estimates that between $50 billion to $100 billion worth of vaccines will be needed by 2050 to fight mosquito-spread diseases such as Zika, dengue, and yellow fever.

And the need will keep going well into this century, with an estimated one billion more people than today being exposed to tropical diseases.

Applications on the rise

It feels slightly ghoulish to speak of opportunities presented to the pharmaceutical industry by climate change. However, some believe it is pointless to deny a climate apocalypse is upon us, given we are nowhere near the emission reduction required to prevent it. Therefore, vaccines and medications and the research behind improving them will be needed more than ever. There is little wonder, therefore, why pharmaceutical applications in Nice Classes 1, 3, 5, 10 and 44 have increased significantly over the past decade. We expect to see more of the same over the coming years.

Change often favours some and damages others. The opportunities presented by climate change to the pharmaceutical industry will not only help shore up the sector against an economic downturn, but it will also save many from succumbing to diseases for which, at this moment in time, seem to be part of an incomprehensible future that we may need to accept as our new reality.

During the webinar we share our data insights into recent Pharma trademark activity. Tiffany Walter expands on the main challenges of of trademark management, including issues related to trademark screening and filing, as well as brand protection. 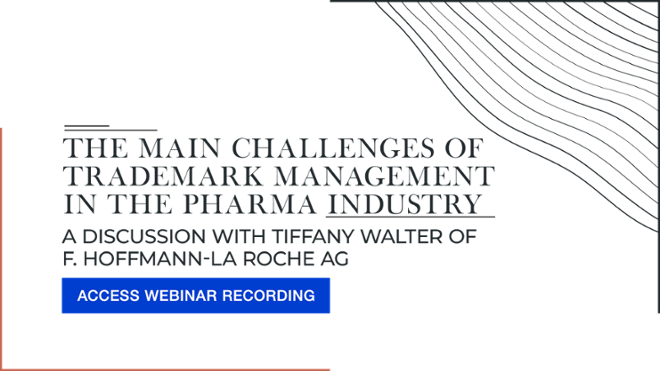