It’s Time To Get Creative With Trademarks

Non-traditional trademarks have become an increasing trend over the past 18 months. The need for brands to differentiate themselves from competitors has led to colors, jingles, sounds, and even smells to be registered as trademarks.

Because EU trademarks no longer require “graphic representation”, in theory, any form can now be trademarked under its jurisdiction, provided it can be presented in a “clear and precise” way and meets the distinctiveness criteria. But before rushing off to file your organization’s color scheme or product’s smell, you need to bear in mind that there are challenges relating to registering non-traditional marks that even the world’s best-known companies find difficult to overcome.

Cadbury gives up the fight for purple

After 24 years, Cadbury announced in February 2019, that it was giving up its trademark of the color purple (Pantone 2685C).

The decision came after the UK Court of Appeal dismissed an appeal from the chocolatier against a decision of the High Court that a trademark registered for purple packaging was not a series mark.

Cadbury’s main competitor, Nestlé, opposed the application, arguing the color purple had zero distinctive characters and was too broad for the range of products Cadbury sought to cover.

Lord Justice Floyd, who gave the judgment, held that both descriptions described every possible case where purple was the predominant color. Furthermore, both the High Court and the Court of Appeal took issue with the word “predominant colour” used in the mark description, stating it was too broad.

The Court also held that on its proper construction, the registration of a particular shade of purple applied to the packaging of chocolate bars constituted a single trademark, rather than a series of marks within the Trade Marks Act 1994, section 41.

Cadbury must now rely on the law of passing off to protect its unique purple tone from competitor use.

But it is not the only big brand to lose the fight over the color purple.

Red Bull may give you wings, but its trademark application refused to fly

One of the biggest 2019 European decisions, which we detail in our recent eBook: “Significant dispute trends and case law based trends in the USPTO and EUIPO”,  concerned Red Bull’s attempt to trademark two color combinations (002534774 and 009417668) for ‘energy drinks’ within Nice Class 32.

The marks’ validity was challenged because Red Bull failed to comply with the requirements of Article 4 and Article 7(1)(a) of Regulation No. 207/2009 (now Art 4 and 7(1)(a) of Regulation No. 2017/1001). It was argued that the marks failed to satisfy the Sieckmann criteria, namely that a mark must be “clear, precise, self-contained, easily accessible, intelligible, durable and objective”.

The CJEU dismissed Red Bull’s appeal and confirmed the decision of the General Court, which in turn maintained the declaration of invalidity by the EUIPO. The CJEU stated that the graphics of a color-based trademark must be precise and sustained, so they are defined in a set and consistent manner. Abstract representations will struggle to gain approval without a clear description of the convergence of colors.

The MGM lion roar. The 20th Century Fox fanfare. The Federal Signal Q2B siren. All of these sounds are trademarked. And in 2019, MobilePay’s “sent” confirmation sound was added to the list. Approved by the Danish Patent and Trademark Office, it is the first Danish MP3 sound trademark. The approval was made possible after the new Danish Trademark Act came into force in January 2019.

Passing the test for non-traditional trademarks

The European Union Intellectual Property Office (EUIPO) can theoretically register any mark if it is distinctive enough and is presented in a “clear and precise” way. Moreover, the EU functionality rule prevents any protection of signs which serve a functionality related to a product.

The US Patent and Trademark Office (USPTO) states that to be eligible for registration, non-traditional “sense” marks must:

One of the main reasons for Zippo’s successful sound application is that the brand provided substantial proof through social media, news articles, and movie clips of the consumer and industry recognition of the distinctive sound of its lighter.

The scope provided by social media in providing marketing platforms has made establishing a strong brand simultaneously easier and more challenging. Non-traditional trademarks provide an opportunity for organizations to become more creative in their brand recognition strategies and protect their innovation. However, brands need to put the hard graft in before applying for registration and collate robust mark distinctiveness.

We took a closer look at the case law surrounding the rising trend towards non-traditional trademarks, as well as four other significant trademark case law trends found in both the USPTO and the EUIPO. Our Data Scientist, Mikko Virtanen, analyzed our platform’s oppositions data too and discovered three distinct dispute trends.

We share all of these insights with you in our new eBook. 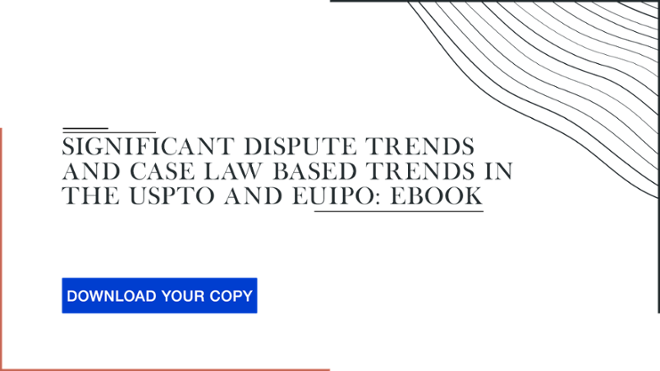