How China Is Dealing With Bad Faith Trademarks

In the world of trademarks, few things have driven Corporate Counsel and IP Attorneys crazier than China’s bad faith trademark epidemic. Filers seek to extract money for the transfer of marks (trademark squatting) or piggyback off the reputation of established brands. Whatever the underlying goal, according to the UK government, bad faith trademarks are “the single most common business irritant reported to the British Embassy in Beijing, affecting hundreds of marks each year across all industry sectors.”

To counter bad-faith trademarks, China has passed a new law which will come into force on 1 November 2019. Aimed at reforming the rampant abuse resulting from the first-to-file regime which currently means businesses have to race to file for a mark in China, the new regulations will remove the need for organizations to register under as many categories and sub-categories as is economically viable.

The changes come in the form of amendments to the Trademark Law (TML). A new provision has been added to Article 4, which provides that "Any bad faith trademark applications without intent to use shall be dismissed."  In addition, Articles 33 and 44 are amended correspondingly so Article 4 can be invoked in an opposition action before the China Trademark Office (CTMO) or an invalidation action brought before the Trademark Review and Adjudication Board (TRAB).

Under Article 19, trademark agencies now have an obligation to evaluate trademark applications for good faith.  If they receive an application which they know or ought to have known is in bad faith, they are obliged to refuse the instruction.

To understand the extent of China’s bad faith trademark applications, it is useful to look at the historical data. The following illustrates the scale of the issue:

The cost to the Chinese administration and legitimate corporations resulting from bad faith trademark filings is incomprehensible. Therefore, the new laws will be welcomed across the globe. Bad faith trademark filers will now face penalties in the form of warnings and fines. Under Article 68, trademark agencies who violate Article 4 may even be subject to criminal liability.

How is ‘bad faith’ defined?

The Certain Provisions for Regulating Applications for Trademark Registration  (Draft Provisions), published in February 2019 by the China National Intellectual Property Administration (CNIPA) for public comments, set out guidelines to assist the TMO in identifying and acting against bad faith applications (described as “abnormal trademark applications” in the Draft Provisions).

A backlist of bad faith applications may be created and published on the CNIPA’s website.  Names may also be published on China’s National Enterprise Credit Information Sharing Platform, which rates citizens behavior and imposes consequences if it falls short.  This may act as a significant deterrent for potential trademark squatters.

Although there are uncertainties about the practical implications of the new laws, one can hear a collective sigh of relief from Counsel around the globe that China is finally taking steps to tackle its rampant trademark filing abuse problems.

Watch our webinar to discover more about Chinese trademark law and its impact on your business strategy in China today! 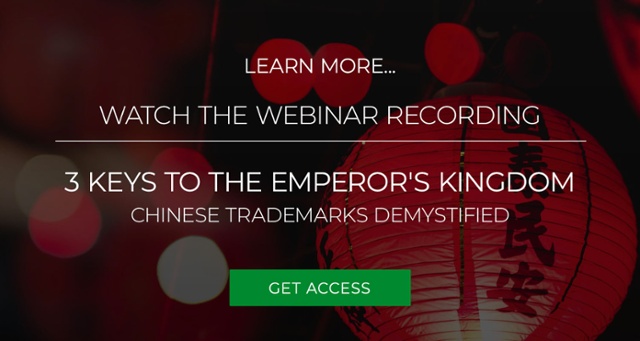