A Question Of Faith

On the issue of bad faith trademarks in the European Union, Advocate-General Sharpston, in her Opinion in Chocoladefabriken Lindt & Sprüngl v OHIM  stated:

"There is no simple, decisive test for establishing whether a trade mark application was submitted in bad faith".   "…bad faith relates to a subjective motivation on the part of the trade mark applicant - a dishonest intention or other ‘sinister motive'—which will none the less normally be established by reference to objective criteria; it involves conduct which departs from accepted principles of ethical behaviour or honest commercial and business practices, which can be identified by assessing the objective facts of each case against such standards".

Under EU trademark legislation, a trademark can be declared invalid if the party objecting to a mark can prove the filer acted in bad faith at the time of making the application.

Bad faith is not defined in trademark legislation as such, but it is generally given its ordinary meaning by several judgments of the CJEU. This is not an easy task though. In the very same case, the concept of bad faith in normal use was referred to by the Advocate-General as a “subjective mental state of a general nature”, and Sharpston added that the intention of the applicant should be determined by the objective circumstances of the case.

In the EU, along with most other countries, bad faith must be proved by the party who is claiming it. In other words there is a presumption of good faith until proof to the contrary is accepted. This presumption actually stems from the general principles of law.

China has recently experienced exponential trademark filing growth and a recent look back with ExaMatch at some historical data reveals that in 2008 China had 640 thousand filings. Ten years later, this had increased to a whopping 7.2 million! Compare that to the United States, where there were over 290 thousand filings in 2008, increasing by over 60% to almost 470 thousand in 2018.

However, a recent development in China is worth mentioning here. As anyone who works in the IP world knows, China has also been distinctly problematic in relation to bad faith applications. And, last year, as a result of the high volume of bad faith trademark applications in China, its trademark law was amended in November 2019.

Europe also has several significant cases relating to bad faith marks, and we can clearly see that the relevant factors will depend on the facts of the case. A recent case involved the famous Brazilian footballer, Neymar da Silva Santos Júnior - commonly known as Neymar. Neymar is widely considered as one of the best players in the world!

On 17 December 2012, Carlos Moreira filed an application for the registration of the EU word mark NEYMAR for goods in Class 25 (clothing, footwear, and headgear). The mark was registered in April 2013.

In 2016, Neymar da Silva Santos Júnior contested the validity of the EUTM, alleging that Mr. Moreira had acted in bad faith when filing the application. EUIPO's Cancellation Division declared the EUTM invalid in its entirety on the basis of EU Trade Mark Regulation 207/2009 (EUTMR) art.52(1)(b).  The appeal of the applicant was also dismissed. In the judgment the court referenced the precedent decision of Copernicus-Trademarks v EUIPO — Maquet (LUCEO), T‑82/14, EU:T:2016:396; judgment of 7 July 2016 and noted that the concept of bad faith relates to a subjective motivation on the part of the trade mark applicant, namely a dishonest intention or other sinister motive. It involves conduct which departs from accepted principles of ethical behaviour or honest commercial and business practices.

By filing and registering the contested trademark, the Board agreed that Mr. Moreira had prevented Mr. Neymar from undertaking certain commercial activities in Europe, something that most top-level footballers want to do.Therefore, Mr. Neymar's interests were detrimentally affected by Mr. Moreira's application.

Regarding as to whether Moreira might have been unaware that Neymar was a rising star in the football world at the time the application was filed, the Board concluded:

“As regards the invalidity ground based on bad faith, the applicant contends that in December 2012 when the contested EUTM was filed, the proprietor could not be unaware of the notorious pseudonym ‘NEYMAR’ (which is moreover not a common name in the EU) and of the rights he infringed. In the applicant’s view, the proprietor did not pursue a legitimate interest when applying for the contested mark and his intention to harm can be inferred from his knowledge. NEYMAR was well-known and had an established reputation in 2012. The intention of the EUTM proprietor was in fact to deprive the footballer of a sign that was necessary for the continuation of his activities. In addition, the malicious intent can also be inferred from the proprietor’s wish to take advantage of NEYMAR’s image and names through the filing of three other subsequent EUTMs for the signs ‘NJR’, ‘NJR NEYMAR JR’ and ‘NEYMAR FOOTWEAR’. The aim of the proprietor was thus to prevent NEYMAR from using his name to commercialise the goods that are usually commercialised by footballers. The contested EUTM is registered for clothing, footwear, headgear. These goods include football shoes, sportswear, hats and caps that are usually worn and marketed by football players, who commonly register trade marks with their names to designate goods in Class 25."

Moreira appealed to the General Court, arguing that the Board was mistaken when it ruled that he knew Neymar was an international football star and that when he filed his mark, he intended to exploit and benefit from Neymar's reputation and celebrity.

The court agreed with the Board, noting that on the day Mr. Moreira applied for registration of the contested mark, he had also filed an EUTM application for registration of the word mark IKER CASILLAS which, as the Board had noted, was "the name of Spain's erstwhile goalkeeper and captain, winner of two European Championship medals, one World Cup, together with Champion's League and Spanish league titles".  The Board concluded that "this shows that the EUTM proprietor possessed more than a little knowledge of the world of football".

Concerning his deliberate intention to benefit from Neymar's reputation, Moreira claimed that he had chosen the mark NEYMAR because of the phonetics of the word and never once thought of the football star. However, given that evidence showed it was inconceivable that Moreira, with his knowledge of football, would not have heard of Neymar and the court rejected Mr Moreira's assertion.

Regarding the significance of this decision, Dr Janet Strath and Katie Cameron ¹  commented:

"The mere circumstance of having filed those marks [relating to Neymar] did not prove, as such, the bad faith allegation. However, as this decision illustrates, filing of other marks in dubious circumstances or applying for other marks that appear to misappropriate other traders' goodwill is likely to be viewed by the court as strongly indicative of the intentions of the applicant of a certain mark."

When running a search for the mark text “Neymar” in ExaMatch and filtering by EU Registry only we see just 5 applications to date - 3 are invalid (which are owned by MOREIRA, Carlos). A further 1 invalid mark is owned by GAUDEZ, Guillaume and we see 1 valid mark owned by NEYMAR SPORT E MARKETING S/S, Ltda, at the time of writing.

For example, running a quick search with ExaMatch in 180 territories reveals that there are currently over 70 valid applications for the mark NEYMAR. The top 3 registries are China’s CNIPA (32.4%) Brazil’s INPI (18.9%), and France’s INPI (12.2%).

And,iIt is interesting to note that 7/10 of the top products are all found in Class 25 (Clothing).

You are also able to see invalid trademarks filed by other parties with the NEYMAR sign during your research - you can also explore further and see the grounds of refusals/invalidations for each trademark.

Take a look at your opponent’s playbook

The finding of bad faith by the court in Moreira v EUIPO was also influenced by the applicant’s own behavior in building his portfolio. ExaMatch can easily detect this kind of behavior because you can also choose to define and narrow your search within the tool by trademark owner.

Accordingly, we can see the applicant’s own serial trademarking of NEYMAR in our results and final business intelligence report, including the marks NJR, NJR NEYMAR JR, NYM, NEYMAR FOOTWEAR and also one other player IKC IKER CASILLAS.

Bad faith trademarks are notoriously difficult to prove in almost every jurisdiction. It is therefore always advisable to monitor trademarks for any third party applications and try to cut them off at the pass. And, for those of you who would like to create a brand new trademark portfolio/brand it is important that your portfolio/brand shows your business’s intention to use the trademark, but not the intention of taking advantage of another sign or well known person!

To delve deeper into the law related to this contentious area, please join our live and interactive webinar on Wednesday, 8th July 2020.

During the discussion, expert speakers, partners at law Carolina Calheiros and Jan Gerd Mietzel, at international law firm Rolim, Mietzel, Wohlnick & Calheiros LLP, share their insights into bad faith applications in the EU and more specifically, the Sky vs. Skykick case with us all.

Webinar co-host Zac Casstevens, Trademark Specialist at TrademarkNow, will also share some data insights into the EU trademark market, while Carolina and Jan Gerd take a deeper look at the specific aspects of this interesting case and discuss the implications for the future interpretation of bad faith in EU trademark law and examine best practices for brand owners. They will also take Q&A from attendees on the day.

We look forward to welcoming you! 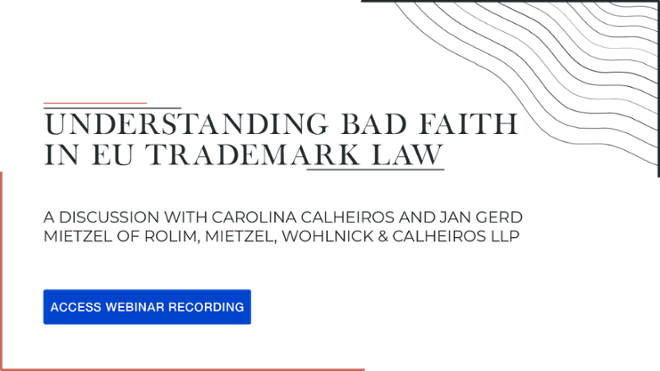