At the beginning of each year, it has become customary for TrademarkNow to celebrate the outstanding and unique centurial anniversaries of trademarks that have remained valid over the past 100 years. So as we embark upon the third decade of this century and begin the 2020s, it seems fitting to look back to the year 1920, learn from the social, political and cultural changes that shaped the decade, and honour the resilience of prominent brands, companies and ideas which have shaped the past 100 years.

The year 1920 saw a substantial degree of social change. Most notably, in the United States, as the year marked the signing of the 19th Amendment to the U.S. constitution, making it federally legal, for the first time ever, for women to vote across the entirety of the country.

The League of Nations was founded in the first attempts to build towards a world of peace, rather than continuous war. Prohibition in the US attempted to rid the country of what was thought of by authorities as the destructive drug, alcohol. All the while, the Jazz Age had begun to take over clubs and bars around the globe. Originating in the underground venues of New Orleans, this free-flowing, sophisticated sound birthed an important cultural movement, which spread quickly to the far reaches of the world. Thus shaping society, art and fashion in ways that you may not have imagined.

7 brands that have gone the distance

We honed in on 7 international brands that are great examples of brand longevity, using Examatch, our research and preliminary trademark search tool, which shows trademark activity by product class and type, around the world, with links to 180 registries’ details.

While Tiffany’s story began an impressive 182 years ago in the year 1837, it was the year 1920 that sparked the most active year for the world-famous jewellery retailer’s trademark filings. With each month’s passing, jazz had begun to fully enchant the higher-circles of society around the US. Regular gatherings of the country’s elites were a common sight in the jazz clubs of New York City, most of whom were willing to pay a lot of money for more elaborate, one-of-a-kind tokens of ostentation. Tiffany’s themselves noted that this, teamed with the increased freedoms for the women of the roaring 20’s, led to a spike in the demand for high-end jewellery and drastically increased the popularity of Tiffany’s stores.

In 1920 alone, the company registered 20 trademarks in the USPTO for both “TIFFANY & CO” and “TIFFANY”, across 19 separate classes, which is substantial compared to the handful of trademarks they had to date. (and no, none of them were in class 30, so I guess breakfast at Tiffany’s was not a common recovery-technique for New York jazz lovers, following a night at the clubs)!

This popular British food spread was first conceived in 1902 by german scientist, Justus von Liebig, as a by-product of beer brewing. It’s no wonder that this diverse yeast spread was created in Europe rather than the US, with all breweries on lock-down across the Atlantic. The trademark for “MARMITE” was registered in the UK and Ireland 100 years ago, and the Unilever product remains a favourite hunger-fighting snack for families around the island nations to this day.

Reckitt Benckiser’s bacteria-banishing brand of toilet cleaning solution claims to kill 99.9% of bacteria in your bowl, and it appears that the bottle’s contents were also potent enough to protect the Harpic brand from being killed by 100 years of changing consumer trends. The trademark reaches its 100 year milestone this year in the UK and Ireland and is still doggedly battling bacteria and making sure our toilets are presentable for when guests stop by the house.

It’s no surprise that Castrol, one of the world’s foremost automotive lubricant manufacturers, has a trademark strong enough to last the test of time. Particularly in the automotive mecca that is Germany. From 1920 through to the end of the following decade, the land speed record had been broken 23 times in total, and Castrol note that 18 of those were completed with Castrol oil flowing through the veins of the engine. Clearly the trademark is well-oiled also and has characteristically been running smoothly since it’s approval in 1920.

The 20’s are often looked back at as one of the most glamourous decades for style and film in the US, but you may not know that the decade also brought about the Golden Age of early German cinema. With a booming silent film culture, and some of the greatest minds in the film industry at the time, the lighting and framing techniques of German of 1920’s movies are said to have paved the way for the great film-noir Hollywood movies we’ve all grown to love. Paramount Pictures clearly had an eye on the creativity of the German film-makers of the time, and registered their brand and iconic logo there in March of 1920.

During the 1920’s, Finland was the cigarette smoking capital of the world. Tobacco-Free Finland 2030 say that during this decade the Finnish public consumed more cigarettes than any other country in the world, with companies like Amer and Suomen Tupakka holding a firm grasp of the market. However, even with the strong domestic competition, Japan Tobacco thought it worthwhile to try to take advantage of the large consumer market in Finland and they registered the CAMEL brand there in February of 1920.

The year 1920 brought about the era of precision for Gillette. Having spent the past 20 years perfecting the disposable blade, the company started to focus their efforts on creating a blade that would shape the face of the consumer razor industry for the next 40 years. With their new innovations, 100 years ago Gillette traversed the globe and brought their blades to Australia. Solidifying the brand name down under with the application of trademark IPAU 28857 in the Australian PTO.

Having taken the time to revel in the resilience of trademarks that have gone from strength to strength over the past 100 years, it seems only fair to also raise a glass to the trademarks that could never be.

The United States during the 1920’s saw a nationwide constitutional ban on the production, importation, transportation, and sale of alcoholic beverages, starting in the year 1920 and coming to an abrupt end some 13 years later in 1933. The national crackdown on alcohol is well documented as having created tensions between authorities and the general public, while sparking the rise of gangsters like the infamous Al Capone.

Given the illegal nature of alcohol during this period, we were curious to see how trademark applications and registrations were affected by the ban. Again, using our knockout tool, Examatch, we were able to analyze all trademarks filed in the USPTO from 1920-1932, which included the terms “alcohol”, “beer” and “liquor” in their product descriptions. Unsurprisingly, the results were very interesting.

Between that period only 3-10 applications including alcohol in the description were filed per year in the US. All of which actually only included non-alcoholic beverages or alcoholic products which were not made for human consumption.

However, using the same criteria but for the year 1933, when prohibition ended, that number shoots up to a staggering 49 applications in a single year, sending a strong statement to the people of America. Alcohol was back.

Building brands is difficult and 100 years ago it could take months to get a trademark clearance report and several weeks to analyze it! Nowadays our trademark management solution helps trademark professionals to save their time and improve the collaboration between their legal and marketing teams. Today we deliver instant trademark clearance reports, in less than 15 seconds, that are ranked and analyzed in order of potential trademark infringement threats.

Ensuring the longevity of a brand however requires vigilance and a robust brand protection strategy. You can be sure that all of the 7 trademarks featured here that are celebrating their centennials this year did not survive without a stringent trademark monitoring, policing and enforcement strategy.

Make sure your brand stays yours for the next 100 years! 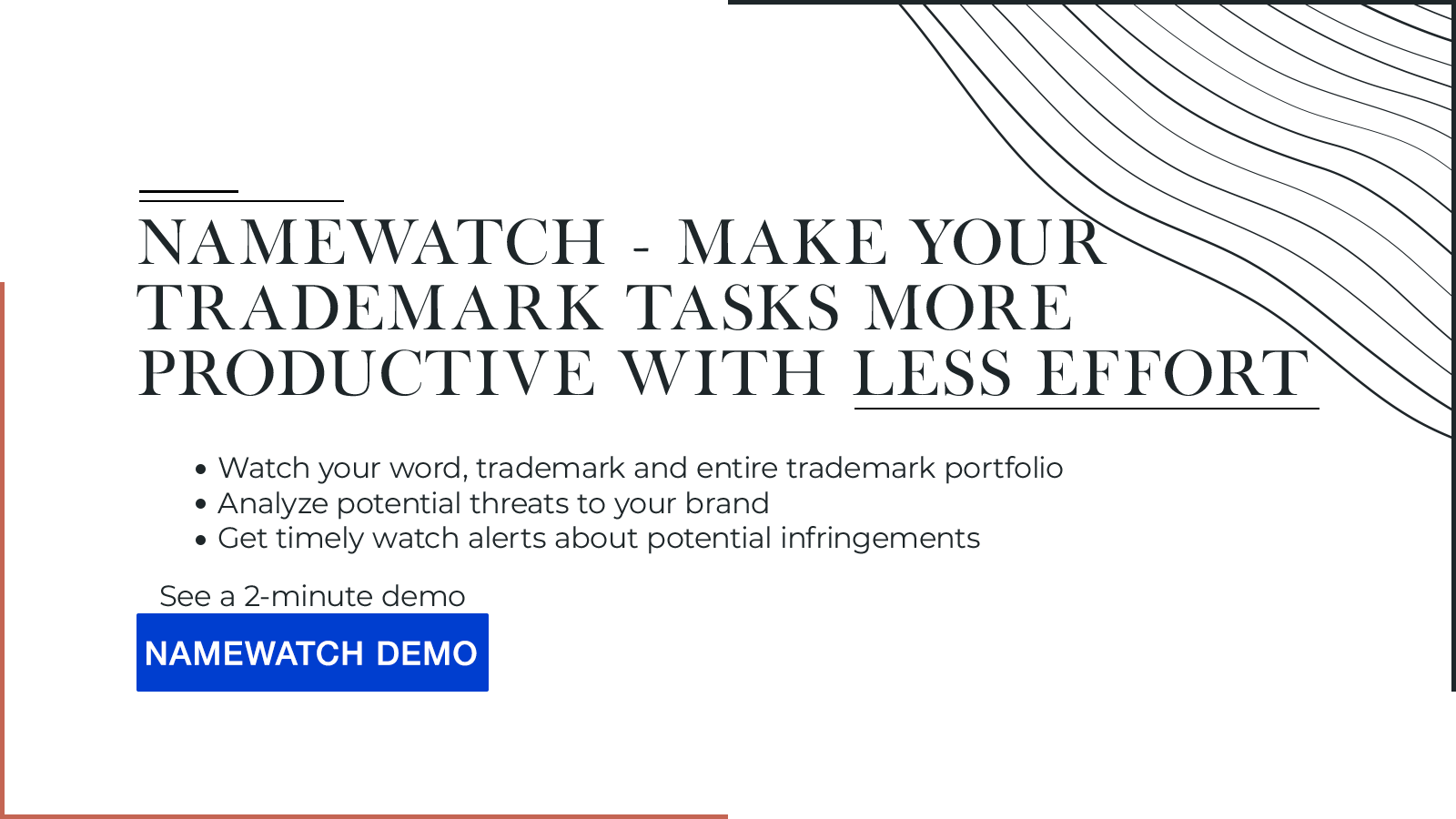 By Colm MacSweeny January 8, 2020
Colm MacSweeny, Senior Trademark Analyst at TrademarkNow, has been working in business development for the company over the past 2 years. He specializes in finding inquisitive professionals in the legal industry and introducing them to the benefits of AI-powered clearance and watching. Colm holds a BA in Economics & Psychology and a Masters in Business Economics. He has written blogs and ebooks for tech startups and has played music professionally for many years. Colm enjoys spending his time doing anything creative, whether that be music, art, reading or simply having a conversation with someone interesting!