Easter takes place this year on April 12th and typically occurs at the beginning of spring, a season of new beginnings, when flowers bloom and animals are born. Eggs are a symbol of birth and fertility. And, so it is perhaps not surprising that Easter eggs are associated with this time of the year.

The story of Easter eggs starts in Medieval Europe. According to Time Magazine many scholars believe that the eggs may have their origins from the Anglo-Saxon festival that celebrated the goddess Eastre.

The traditional practice of dying eggs and then hiding them dates as far back as 1920, according to Ronald Hutton, a history professor at the University of Bristol. In his book: “Stations of the Sun: A History of the Ritual Year in Britain” Hutton states that the house of King Edward I bought 450 eggs to be either colored or covered in gold leaf and be distributed among “the royal entourage” for Easter.

In the Victorian era family life came to the fore in the late 19th and early 20 century and Easter was one among many religious holidays that shifted towards family, with more of an emphasis on involving children. Easter egg hunts were born and the first White House Easter Egg Roll took place, in 1878.

Today, in addition to homemade traditional colored eggs, chocolate Easter eggs are made commercially by global consumer goods corporations in their millions and many contain hidden treats!

Let’s go on an egg hunt

Although most public Easter egg hunts have been cancelled this year, many of us will still be able to organize our own in and around our home or garden. And, to mark the moment TrademarkNow went on our own Easter egg hunt and investigated the trademark activity of 4 of the best-selling Easter egg brands on the market, using our search and watch platform!

The first trademark was registered in Nice Class 30 (Staple Foods) by Cadbury UK Limited for the mark text CADBURY, back in May 1886! The mark is still valid today. SInce then it appears that 1994 was their most prolific year with over 160 trademarks registered!

Our preliminary Enhanced Knockout Search tool reveals that the trademark owner Cadbury has over 3,200 valid trademarks in Class 30 registered at the time of writing, containing the product descriptions “Chocolate”, “Easter” and “Eggs”.

It looks like the UK and Ireland are the biggest Cadbury chocoholics. The top 3 registries are the United Kingdom IPO (16.2%), followed by Ireland IPO (11.1%) and Australia IPAU (7.5%).

The top 3 representatives for Cadbury are WILSON GUNN, MACLACHLAN & DONALDSON and Griffith Hack.

It appears that there is a good reason why Cadbury has remained as one of the strongest brands when it comes to Easter eggs on the international market today - Cadbury has always kept a very close eye on all of their trademarks and their owner, Mondelez International Inc continues to prioritize its brand protection strategy since acquiring Cadbury. They have filed more than 130 oppositions to third party potentially infringing trademark applications since 2010.

The Hershey Company (commonly known as Hershey’s) is one of the largest manufacturers of chocolate in the world. Head-quartered in Hershey, Pennsylvania (which is also home to Hersheypark and Hershey's Chocolate World) Hershey’s is a popular brand, particularly in their home country, the United States. Their solid milk chocolate and Cookies & Cream Easter eggs are a big hit during any Easter hunt stateside!

The very first trademark was registered by Hershey Canada Inc for the mark text LOWNEY’S at the beginning of the last century in April 1906 in Nice Class 30 and the trademark is still valid today. 2012 was their most prolific year with more than 250 filings recorded.

An instant Enhanced Knockout Search reveals that the trademark owner Hershey has over 1,400 valid trademarks in Class 30 registered at the time of writing, containing the product descriptions “Chocolate”, “Easter” and “Eggs”.

The American brand Hershey’s is a popular choice of chocolate with their neighbours. The top 3 registries are Canada CIPO (12.3%), the United States USPTO (7.4%) and Mexico IMPO (6.5%).

Maintaining brand strength since the early 1900s is no mean feat and this is borne out when examining the owner Hershey Co. and their recent oppositions activity. In 2015 alone the company filed an impressive 13 oppositions and currently their most protected brand is the infamous “Hershey Kisses”.

Kinder is a confectionery product brand line produced by Italian confectionery multinational manufacturer Ferrero, who are the second biggest chocolate producer and confectionery company in the world. Kinder eggs are firm favorites with many children from all over the world (each egg contains a mini surprise) and are not just for Easter - million of Kinder eggs are sold all year round!

The very first trademark was registered by owner Ferrero S.P.A for the mark text TICK-TACK in September 1904 in Nice Class 30 and the trademark remains valid today. 2013 was their most prolific year to date with more than 260 trademarks filed.

Ferrero has more than 4,200 valid trademarks registered in Class 30 today, containing the product descriptions “Chocolate”, “Easter” and “Eggs”, according to our preliminary search tool.

Owner Ferrero S.P.A fiercely protects their brands and since 2010 they have filed more than 55 oppositions. Their most protected brand is currently Tic-Tac, followed by Kinder.

Nestlé S.A. is a Swiss multinational food and drink processing conglomerate corporation headquartered in Vevey, Vaud, Switzerland. It is the largest food company in the world. Their Easter eggs are legendary, with the Kit Kat, Aero, Smarties and Rolo brands being firm favorites amongst the staff at TrademarkNow!

The very first trademark was registered by Société des Produits Nestlé S.A. for the mark text MENIER in June 1876 in Nice Class 30 and the trademark is still valid today. 2012 was their most prolific year to date with more than 860 trademark registrations recorded.

Nestlé has more than 12,000 valid trademarks registered in Class 30 today, containing the product descriptions “Chocolate”, “Easter” and “Eggs”, according to our preliminary knockout search tool.

Société des Produits Nestlé and Nestle Australia are amongst the top representatives - Nestlé demonstrating that they like to keep their trademark management in-house when they can!

Nestlé owns many of the strongest brands on the market today that are registered in Class 30. This brand strength is not sugar-coated! Over the last 3 years the company has filed over 180 oppositions since 2017.  Their most protected brands today are “Lean Cuisine” and “Skinny Cow”.

Brand strength is not bought, it is earned. The best brand owners, like Cadbury, Hershey, Ferrero and Nestlé, adhere to the “4 M’s” of trademark maintenance, namely they: mark; make careful use; monitor and maintain their brands constantly.

TrademarkNow works with hundreds of the largest brands in the world and we have thousands of happy clients - from the very big like Nestlé who use our enterprise solutions to the very small early stage startup who would typically start with our pay-per-use, e-commerce solutions!

And, we have just made brand protection even more flexible and affordable for all businesses. Our new Word Watch pay-per-watch, e-commerce tool is perfect for the brand owner who only needs to monitor a limited number of trademarks. You just set up your customized watch, add the number of countries that you would like to include and get automated alerts to any potentially infringing new trademark applications straight to your inbox for a whole year! 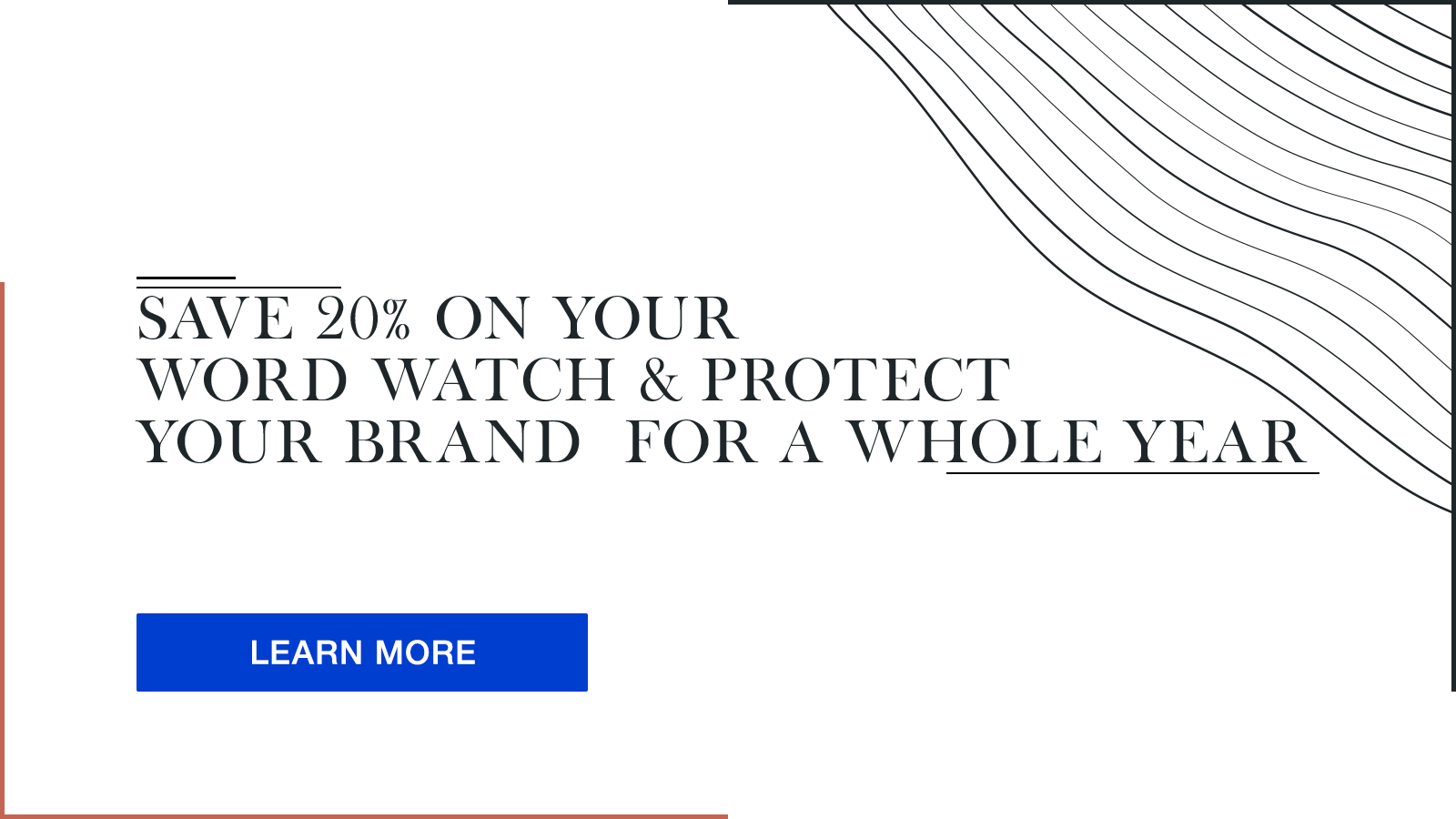